Ad free through public space. Follow the signs and symbols of the billboards of this year’s Reclaim Award. Take a look at the visual and content diversity of the awarded works. Art from A-Y. 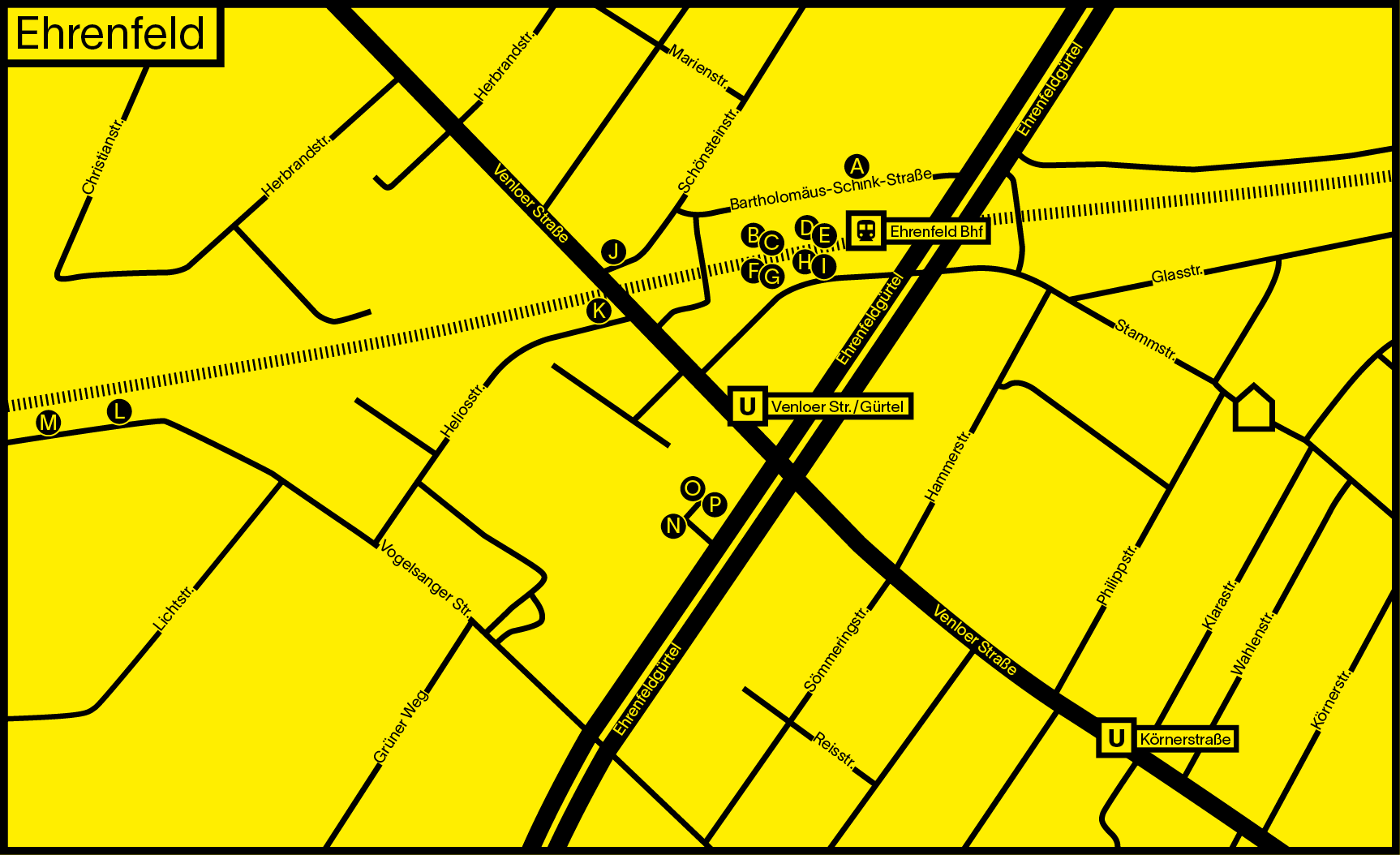 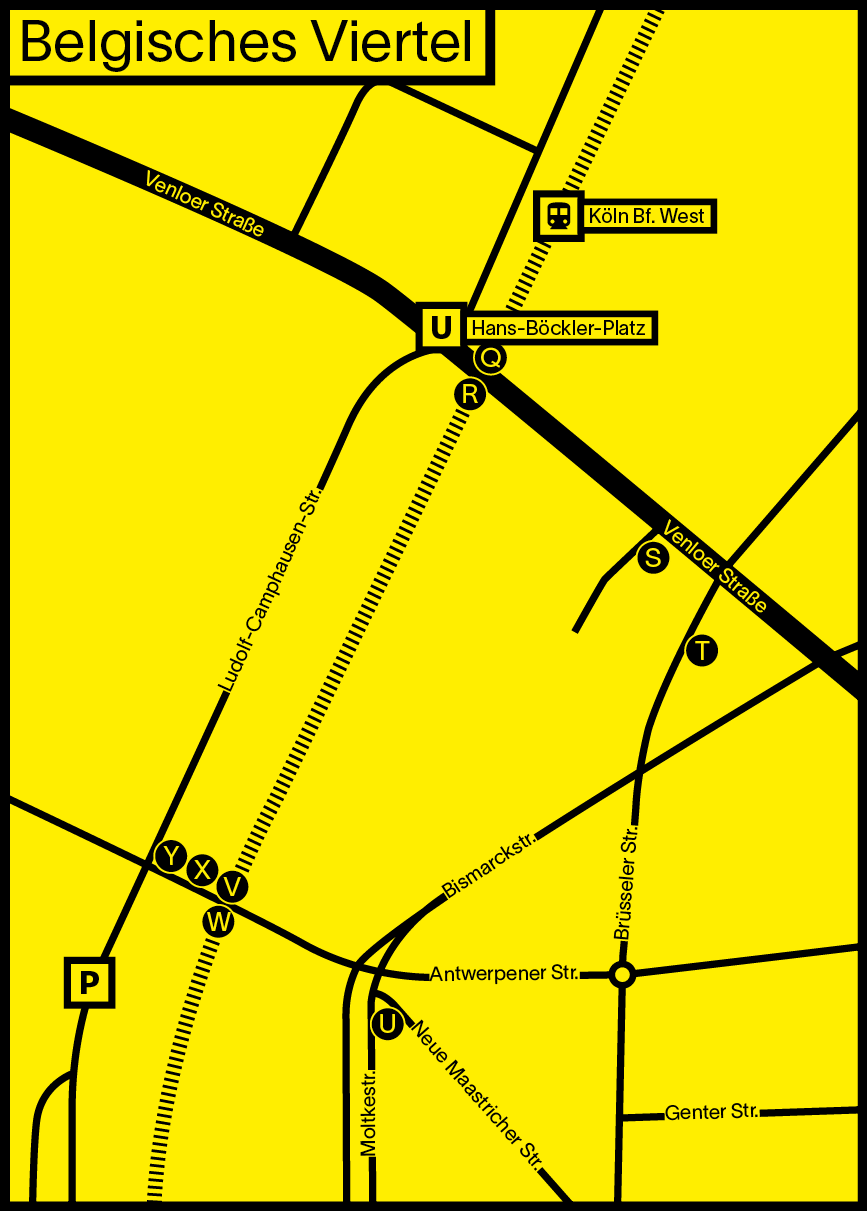 Q Dietmar Wehr HEAD_CC
Humanity’s fascination with itself is made visible in Dietmar Wehr’s work “HEAD_CC”. In the eye of the beholder, his vegetable still of a celeriac is involuntarily transformed into a head. Celeriac stores up water the way our heads store up memories, which makes it virtually predestined for this transformation process. Exhibited on a promotional panel in the public space, the work plays with the notion that this could be product placement in a very ironic way.
R Anja Schlamann UnterBrücken
The series UnterBrücken by Anja Schlamann features low-angle shots of Cologne river-crossings. They are photographed from the water and some of them are structured out of 150 individual shots. These graphically constructive and simultaneously extensively painterly images conjoin in snippets to form one unit, a new bridge. The novel gaze beneath the spanning works of engineering is surprising; their rarely noticed steel constructions become legible in this way. On the undersides, little is seen of the liveliness on the bridges, and that enhances the images’ attraction. Their colour scheme, standardized in 1929, unites them to form one series.
S Anna Siggelkow Platzhalter des Nichts
In her work “Platzhalter des Nichts” Anna Siggelkow decodes found scenes and places them in a new context. She depicts a flattened world between figuration and abstraction. Even if certain elements of the scene are by nature pragmatic and functional, in the images they unfold a remarkable, special energy. The banal objects in the settings appear to play a role in a somehow important and, on the other hand, absurd spectacle. Anna Siggelkow lampoons the human aspiration to try and assign a clearly defined function to everything. It is a manic response to a capitalistically shaped world that plays a visual game of a goal-oriented lifestyle.
T Thelma Pott Lotus Flower
Thelma Pott’s work “Lotus Flower” investigates spatial phenomena in painting. Individual brushstrokes condense into black, slightly elevated transparent surfaces on a red ground. The form reduced to a handful of brushstrokes automatically demands debate about form and content and exposes the artist’s courage in committing herself to her form, to her colours and to her stratifications. In seeking the space that can also signify publicness.
U Jooeun Bae I Wish I Could See You #13
Lying on its back and captured in painting, overthrown commerce seems almost worthy of deliverance. In the collage “I Wish I Could See You” by Jooeun Bae, the excerpt of a commercial image is robbed of its purpose and transferred to different contexts. Different techniques are materials are applied along the way. The arising storytelling of her work consciously withdraws from the unambiguousness that underlay the actually promotional purpose of the purloined image.
V Julie Hrudová Prague
Julie Hrudova’s street photography conceals the essential and displays it simultaneously. In her image, the billowing cloud in the streets of Prague becomes a symbol of the poetic. Fleeting, unique and reduced to human dimensions, it whirls through time and space and transforms the profane event of smoking into a staging worthy of Kaurismäki and the surroundings into the backdrop to match.
W Antonia Gruber Artvertisting_2019_007
Antonia Gruber dissects the human physiognomy in her work “Artvertisting_2019_007”. An attack on our intactness. Humanity in crisis? The prosthetically combined facial parts open up the whole, and call on the beholder to see genuinely. The shift in the structure makes it difficult for our perception to get to the bottom of the generated dizziness and interpret what is shown. Additionally, all determinants remain fleeting in the work’s hallucinatory colourfulness and access to the image is deliberately restricted.
X Jana Sophie Nolle Living Room
In her photographic series Living Room (2017/2018), Jana Sophie Nolle examines the forms of human habitations. Her focus lies in a typological representation of homeless shelters. She does not depict them in situ, though, but reconstructs them in their original form in prosperous people’s habitations. She approaches these private surroundings with particular respect and unites these very different habitations in her images in a dignified way. However, her work also refers to wider phenomena, such as societal upheaval, the housing shortage, exclusion and gentrification.
Y Carla Åhlander Untitled (Berliner Meldestellen)
Carla Åhlander investigates the properties of spaces that, within power structures, become effective instances of control and discipline. The faceless architecture of such spaces and their setting to arrange and order humanity conveys the person into the bureaucratic logic of the subject to be managed. In Åhlander’s image the countless stories of what is to be recorded are characteristically illustrated with dark humour in the form of black botches over red chairs.
R
de